SLS Robotics Rises to the Top 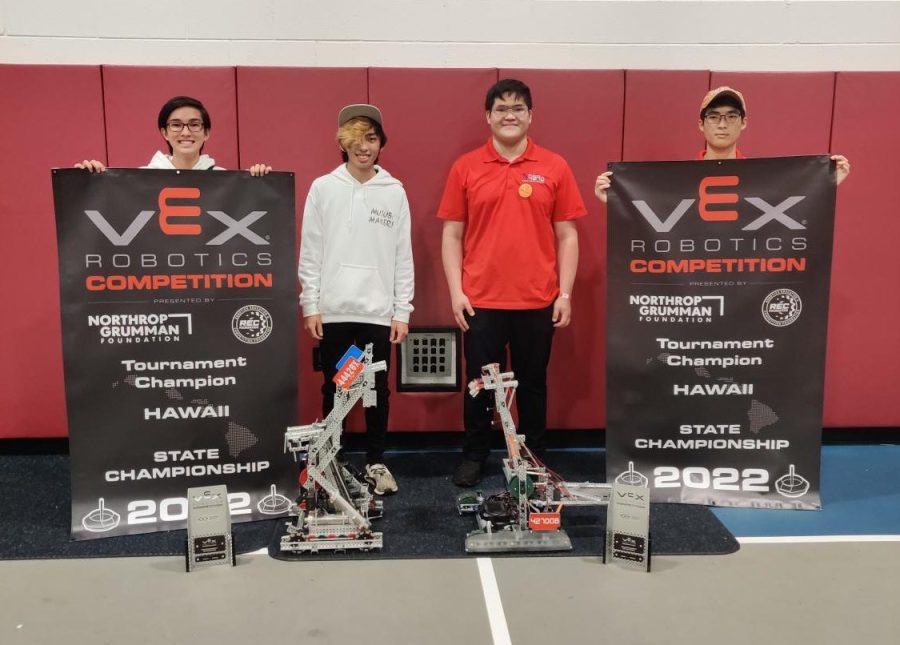 The Saint Louis robotics team has been through it all and has risen to be on top of the state!  Saint Louis has battled its way to victory with a twist!  Saint Louis and Island Pacific Academy have combined to become the ultimate team together and have both been deemed the 2022 VEX state champions.  They have both worked hard and has put countless hours into their craft and now Saint Louis continues to strive for more with VEX World Championship coming up in May.

Robotics has made a big impact for Saint Louis being the first year they have ever won the State championship. Travis Takashima, SLS faculty member and Robotics instructor, elated “I feel great, the hard work the team members put in paid off.” The robotics members have spent countless hours through day and night to reach victory.  Ian Talbert, robotics team leader, unraveled “I feel that the State Championship is the accumulation of my highschool career, and I am proud to have represented Saint Louis in winning.” They continue to strive for better and put in their hard work and dedication throughout the rest of the season.

As Saint Louis won, so did Island Pacific Academy (IPA). They joined forces to compete as the ultimate team. Nate Okimoto, IPA Robotics team leader, recalled “I made an alliance with Saint Louis because they were my best possible compliment to our robot at the time.” STL and IPA have worked together to help each other through the VEX competition and did so in great succession. STL and IPA also worked together well as a team being able to form a bond in the past between each other. “I had also known Ian, the main driver, quite well. This would communicate during the match, strategizing, and teamwork overall better than if I had chosen someone that I didn’t know or talk to,” explained Okimoto. Communication was key to their success for each other and they did so in a friendly and professional manner. “It’s nice to win with someone I’m close with!”

Winning the State championship, STL now looks forward to the next big thing. The VEX Robotics World Competition! Takashima explains “820 of the top teams in the world will be in attendance.” Robotics continues to work on their robot with determination to be on top of the world. They also continue to look towards the upcoming JROTC robotics competition. Currently our JROTOC robotics team (42700E) is ranked number 1 in the nation. They continue to improve and contend for their number 1 spot.

In the future years, robotics will continue to improve and have high expectations. As the upperclassmen did when they were younger, the underclassmen continue to watch and learn from there older brothers. They continue to go for bigger and better with all of their hard work and dedication they all put in as one brotherhood.